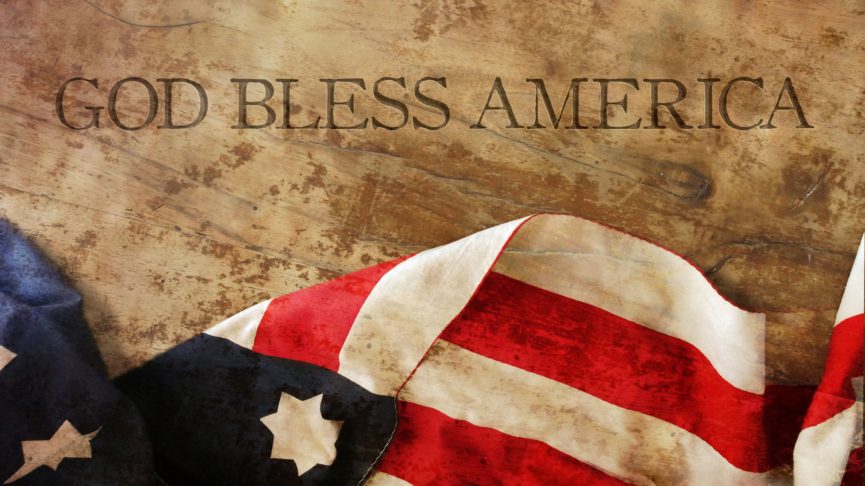 Next week, we will be celebrating Independence Day, a day that will be filled with fireworks, backyard BBQs, and many other festive activities. You will hear many patriotic songs, one of them may even be God Bless America. For some reason, I have been thinking about this very thing. A few weeks ago, in a casual conversation, someone told me they thought that God has stopped blessing America. I don’t know why, but those words have kind of stuck with me.

We throw these words around pretty easy, don’t we? God Bless America. We do so even without really thinking about how God has blessed us, is blessing us or will continue to bless us. We just say God Bless America, thinking that it will always happen. God Bless America was written by Irving Berlin in 1918 while he was serving in the Army near the end of WWI. He didn’t release it until 1938 when Kate Smith sang it on Armistice Day. Berlin released in hopes that it would be a song for peace as tensions were rising once again in Europe with the rise of Hitler, but war with Hilter was inevitable.

Today, it is a very popular song, with many artists doing covers of it. However, when he first released it, the song met opposition. It didn’t have to do anything with the actual song or its lyrics. The opposition was due to the fact his family immigrated from Russia when he was 5 years old and because his family was Jewish.

We have a lot of tension in our county right now. Our political world is divided, much like the world was divided when Berlin first wrote God Bless America and a Jewish immigrant serving in the Army. If you happen to hear this song this next week, I hope that you remember that Berlin wrote it as a peace song. A song that he hoped would bring warring factions together.

I have also been doing some reading for my upcoming Bible Study. I am in the book of Jeremiah as the prophet is warning the people of God he writes these words about his encounter with God,

This is what the Lord of heavenly forces, the God of Israel, says: Improve your conduct and your actions, and I will dwell with you in this place. Don’t trust in lies: “This is the Lord’s temple! The Lord’s temple! The Lord’s temple!” No, if you truly reform your ways and your actions; if you treat each other justly; if you stop taking advantage of the immigrant, orphan, or widow; if you don’t shed the blood of the innocent in this place, or go after other gods to your own ruin, only then will I dwell with you in this place, in the land that I gave long ago to your ancestors for all time. And yet you trust in lies that will only hurt you. Will you steal and murder, commit adultery and perjury, sacrifice to Baal and go after other gods that you don’t know, and then come and stand before me in this temple that bears my name, and say, “We are safe,” only to keep on doing all these detestable things?

Through Jeremiah, God warned the people to amend their ways. If they treated immigrants, orphans, and widows like children of God, God would reside with them. Yet, they trusted in lies and continued detestable things. We know that they didn’t amend their ways, and they ended up in exile. America is not in exile, but we need a good reminder to stay faithful to God. And instead of just saying “God Bless America,” think about how you can be a blessing to not just America but the whole Kingdom of God.

As we celebrate Independence Day this week, let us do just that.